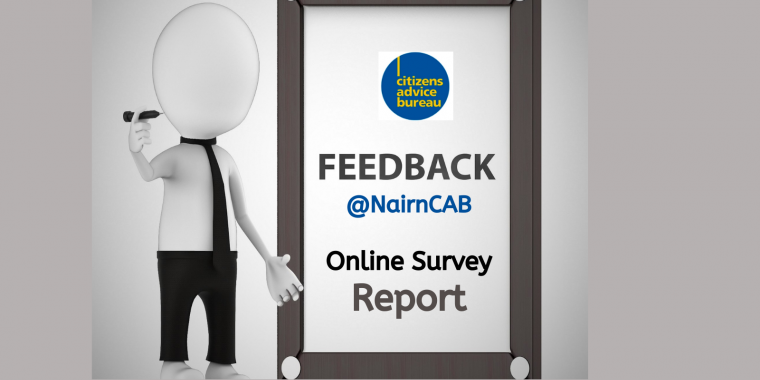 Citizens Advice Scotland, on behalf of Nairn CAB conducted a survey which aimed to help evaluate the knowledge clients have about what Nairn CAB do and how they do it – and what they might be able to do in the future. The survey ran from 15 February to 28 March 2021 and received 204 responses.

Almost all of the respondents (190) had used Nairn CAB previously, and the majority (96%) were satisfied with the service they had received. In addition, 93% of these respondents stated that the service provided by Nairn CAB had either met or exceeded their expectations, while 95% said they would recommend Nairn CAB to others.

Staff/volunteers at Nairn CAB were rated highly in the service they provided, with ‘excellent’ ratings far exceeding the national average for all Scottish bureaux.

Almost half of respondents (45%) reported that they had ‘always been aware of Nairn CAB’, with a further 21% having heard of them through word of mouth and 13% from a family member. Prior to the coronavirus pandemic lock-down the majority (80%) of contact with Nairn CAB had been in person and a similar proportion (81%) stated that this would be their preferred contact method in the future. The most common second choice in terms of making contact (67%) was by telephone.

Respondents were also asked to what extent they agreed or disagreed to certain statements and were most likely to strongly or tend to agree with the statement the service helped me find a solution to my issues (84%). The national client survey ran a similar question, though in that case responses were limited to whether or not the respondent felt the statement was ‘true’ or ‘false’.

A comparison between Nairn CAB and the national figures, where the ‘strongly agree’ and ‘agree’ responses were combined for the former and compared to the ‘true’ responses from the later. Again, the figures for Nairn CAB clients rate well against the national sample.

Almost one in nine of respondents who had used Nairn CAB (87%) stated they were not confident that they would have been able to get the advice they needed had they not had Nairn CAB to turn to. In terms of making the public aware of the service provided by Nairn CAB, the highest proportion of respondents (78%) felt that Facebook was an effective tool. Posters in local shops; GP surgeries; and like the were next most common suggestion (63%), while advertising in the local newspaper was suggested by 57%.

In terms of future advice needs, a little over one-third of respondents (35%) felt that advice related to finances might be needed, with similar proportions suggesting that consumer issues (33%) and social security/benefits (32%) could also be advice needs.

A small number of respondents shared additional thoughts at the end of the survey, the majority of which thanking Nairn CAB for the service the provided and commending their professionalism; knowledge; impartiality; and productivity as a “real asset to Nairn and Nairn folk”. These comments included:

“[They] deserve every credit for making a real difference to the local community and are critical for ensuring the right help gets to the right people at the right time!”

“Nairn CAB have been amazing, never given up on my situations. I dread to think where I would be today if I had not had their never-ending support”

The next steps for Nairn CAB will be to address the following objectives: